Início / Blog / Golden circle: How can the golden circle help your business?

The golden circle is a strategy used by the biggest brands in the market and it can also be useful for your business. Check it out!

The golden circle is a relatively new concept, which has shaken up companies focused on development and competitiveness.

Ever since it was coined and disseminated by Simon Sinek in 2009, the term has gained space and relevance among the most engaged managers.

If you are passionate about innovation and wish to always be up to date about new opportunities, make sure you read this entire article! In this post, you’ll learn a bit more about the golden circle concept and its origin.

You will also learn how it works and why you should apply the method’s guidelines if you wish to increase your influence — and your business’ influence.

And to top it off, you’ll have access to real examples of companies that have applied the golden circle in their strategies and have done quite well.

What is the golden circle and how did it come about?

Great ideas usually come from great leaders. This statement is especially true in the case of Simon Sinek, an expert in leadership and author of the book “Start With Why: How Great Leaders Inspire Everyone To Take Action”, published in 2009.

Later that year, Sinek also participated in a TED Talk, which is a very relevant event where speakers from the most diverse areas of knowledge — education, health, science, technology and businesses, for example —, share ideas and experiences.

Sinek’s participation impacted the audience and went beyond the limits of the auditorium. Since then, his analyses have gained expression and space at the highest corporate echelons around the world. 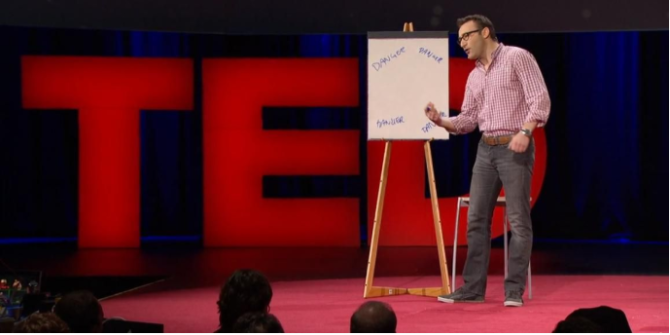 How the concept came about

According to the author, who started his career in an advertising agency, his insight for the golden circle originated from an independent analysis of why certain products were not only consumed, they were beloved.

In order to understand the attributes of an inspiring brand, Sinek evaluated several companies. The golden circle was the final result of his study.

According to Sinek, the golden circle has a clear goal when applied to corporate strategy: create or develop the value of a new product, idea or business.

In practice, the tactic’s weight lies precisely in the power of directing enterprises to what is really important in the journey of inspiring the market: attract loyal consumers and maximize campaign results.

One of the Sinek’s observations, shared during his TED Talk, is emblematic to explain the essence of the golden circle:

“People don’t buy what you do; they buy the reason why you do it”.

This quote makes it clear that a product isn’t merely a product, but actually the translation of a belief, of a desire and even of a dream.

Therefore, the explanation for a successful organization isn’t only in the organization of its processes or in the technology it uses. Although, it should be clear that such attributes are also crucial for its smooth operation.

Business success, on the other hand, is directly linked to a brand’s ability to gather, inspire and delight a captive audience, valuing the essence of the organization above all. And the golden circle, as proposed by Sinek, is an important tool to strengthen this positioning.

How does the golden circle work?

At this point, we are sure that you’re probably anxious to put the golden circle strategy into practice, maximizing your mission’s potential and boosting your brands positioning.

But slow down! Although the tactic has been tested and approved by a number of companies, and that some of the largest corporations in the world apply it, understanding the concept’s structure is key.

Afterwards, you are free to brainstorm!

The focus here is more pragmatic than emotional. It refers to emphasizing the product itself, the object that is being acquired by consumers due to a demand.

All attention is directed to the product’s features and emphasizes its technical qualities.

The priority here is the process through which the company will achieve its goals. It refers to the strategy to be adopted and the action plan to be established.

It’s the step in which the values that support the business are strengthened.

Refers to the company’s major unique feature, the real purpose of the business. It refers to the group of companies, initiatives and projects designed to grow and prosper, based on what the company really believes. It is actually the unique feature of inspiring organizations and the starting point and priority of the golden circle.

What results has the golden circle generated for the companies that have adopted it?

Now that you understand a bit more about the concept and have in-depth knowledge about building the strategy, knowing exactly what the starting point is and the final goal of the golden circle, we’re sure that you are excited to get started on your own purpose, right?

However, before we get to that, you should become familiar with a few examples of companies that were very successful in positioning themselves according to their “why”. After all, there’s nothing better than being inspired by those who were able to focus on what really matters: their essence and mission.

Steve Jobs’ company is undoubtedly one of the yardstick when it comes to purpose. According to the founder himself, the brand was created to give free rein to creative thinking by investing in design. It’s much more than merely making computers and mobile devices.

What Sinek reinforces in this specific case is that, besides being strong, Apple’s mission is conveyed in all of the company’s products. Thus, customers are inspired and motivated to desire Apple’s items and sales soar.

The Honest Company is a good example of a brand that truly knows what its mission is, and it has been growing rapidly because of this.

According to the communications from the company and its leaders, the brand invests in ethical consumerism. Its focus is on bringing safe and eco-friendly products to its customers.

In view of this, it’s easy to see that, in addition to a business strategy, the golden circle is a way of looking at the market and everything surrounding it, including society. The final message is that, in practice, passion and the mission matter and must be valued.

Have you found this content interesting and has it made you rethink your brand positioning?

Now that you’re here, take the opportunity to learn about the market trends and why they deserve your attention. We wish you success!

Is taking on a second job worth it? Find out the pros and cons

Find out if diversifying your sources of income is worth it!

Digital Entrepreneurship: all you need to know to start an online business in 2022

Content curation: a beginner’s guide with strategies and tools for your business

Selecting the right content and presenting it in the best way is essential to creating value for your audience on your blog or social media platforms and boosting engagement!